It is important that residents in Nassau & Suffolk County who have been impacted by Thunderstorm Irene register for FEMA aid as soon as possible.  October 31, 2011 is FEMA’s registration deadline and registrations cannot be accepted after the October 31, 2011 deadline. "Registration keeps open the possibility of a wide range of assistance," said Philip E. Parr, FEMA Federal Coordinating Officer. "If your insurance coverage comes up short, or other damage appears later, you need to be registered with FEMA to be considered for disaster assistance." 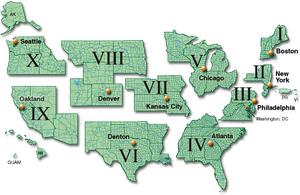 Image via Wikipedia
The following list is a sample of the assistance available through FEMA:
Temporary Housing: (a place to live for a limited period of time): Money is available to rent a different place to live, or a government provided housing unit when rental properties are not available.

seven days a week until further notice.  People with hearing disabilities can use the TTY number, 800-462-7585.

Applicants can also register online at www.DisasterAssistance.gov or with any web-enabled mobile device or smart phone at m.fema.gov. Follow the link to "apply online for federal assistance."

Safety Regulations Don't Add Costs They Decide Who Pays Them

Image via Wikipedia
Robert S. Adler, who is a lawyer and a commissioner of the Consumer Product Safety Commission, wrote an excellent Op-Ed piece in the New York Times defending regulations.  With the daily barrage of individuals complaining about regulations and how regulations are stifling employment.  His Op-Ed piece "Safety Regulations Don't Add Costs They Decide Who Pays Them" tells us what these individuals complaining about over-regulation are leaving out.  That these costs are already being paid for by society (us) including death, injury, and increased costs for health insurance (or taxes for the uninsured).  We totally agree with his points, and his points also apply to environmental and occupational safety regulations.  Where the numbers may be a little more murky (i.e., relations with asthma and pollution, and productivity and safety), nonetheless, regulations basically ensure the company producing the product pays the cost.  Society pays for the true price of the product and decides whether that product is worth buying.

Image via WikipediaAustralian Mining's website reported on October 5, 2011, that up to 10 workers at BHP Billiton’s (BHP) Port Hedland site were exposed to asbestos after completing maintenance work on a tug boat.  According to the Maritime Union of Australia (MUA) crew from Teekay Shipping, a BHP contractor, were exposed to chrysotile, or white asbestos, while removing gasket material on the Star Voyager last month.  Two weeks earlier Teekay workers at Port Hedland walked off the job after asbestos was found in the gasket joining material on another tug, the PB Fitzroy.  Both the Star Voyager and PB Fitzroy were built by Chinese shipmaker Cheoy Lee Shipyards.
Here is the problem, even though Australia has banned the use of asbestos in their country.  That does not prohibit the use of asbestos in products that Australia buys.  Which is the same problem the United States has.
This incident exposed workers to asbestos for 24 hours, and in one case, exposed the worker's family to asbestos after returning home from work in contaminated workclothes.  Workers must be aware of the potential hazards in the materials they work with or otherwise how will they know how to protect themselves.

The U.S. Environmental Protection Agency has issued a compliance order, charging Buffalo's Public Housing Authority with violations of the Federal Clean Air Act resulting in fines up to $25,000 a day for each violation.  See the WIVBTV video for the full story or Phil Fairbank's article "Housing Authority faces fines on asbestos" at BuffaloNews.com.
This is part 2 of the Kensington Heights housing project where the federal government has handed indictments of nine individuals and two contractors on felony criminal charges related to the asbestos removal project.  The 23-count indictment charges the contractors and individuals, including three inspectors -- one from the state, two from the city -- with improperly removing and disposing of asbestos at the complex.  EPA spokesman Michael Basile said the allegations against the authority are similar but are administrative charges, not criminal charges. The authority is alleged to have violated the EPA's National Emission Standards for Asbestos.
Basile says the Buffalo Municipal Housing Authority needs to first submit a plan of proper asbestos removal for what's left in the building, then a plan for a safe demolition.  "We want to make sure that the building is demolished and the removal of the asbestos is done in a safe manner to protect human health and the environment, not only for the people that are going to be working on the project, but for the people that live in the immediate area,” said Basile.  Basile says he hopes the fines will never be imposed, and believes the Public Housing Authority wants to get the asbestos removal and demo process done as soon as possible.  He says once the plans are developed and submitted to the EPA, the approval process should take less than two weeks.

Steve Jobs: How to live before you die | Video on TED.com 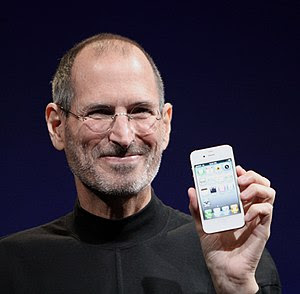 Image via WikipediaThis video of Steve Jobs' commencement speech is amazing and so true about how to live your life (I see many similarities to my own life). We lost Mr. Jobs today, but his impact on our lives will remain for so many years.
Steve Jobs: How to live before you die | Video on TED.com