The theme for this year's annual fishing derby was definitely quantity.  On July 12, 2017 we attended the Professional Abatement Contractors of New York's (PACNY's) 4th Annual Pro-Am Fishing Tournament (Derby).  This year, Future Environment Designs had its own boat called "Catchin Hell" piloted by Captain Tom and First Mate Mike.  There were 10 boats that went out of Point Breeze at Oak Orchard Creek to fish Lake Ontario.  A big THANK YOU to PACNY and Darrin Yehl for again sponsoring this Tournament (Derby), giving us more opportunities to get together and network.  Here was this year's lineup of PACNY members and the boats they were on:

As usual, the day started out beautifully with a nice sunrise over Lake Ontario.  We started loading the boats around 5:50 in the morning.  PACNY's Darren Yehl organized the event and did a fantastic job.  Everybody was ready for the shotgun start at or about 6:30.  We stay out on the lake till around noon.  Then come to shore for the weigh-in, a catered buffet lunch at the Black North Inn (which is always fantastic), and awarding of the trophies/prizes. As many of you know, we are a beer enthusiast and the Scotch Ale, by Rohrbach Brewing Company, available at the Black North Inn is fantastic.  Definitely one of the pleasures of the catered buffet lunch (see our reviews of this beer on Untappd).  This year's winners were:

We had a great time and was entertained by social media's busting on us for the size of our catch compared with our wife's catch.  But all in all, we caught 8 King Salmon and 2 Rainbow Trout which was the most fish we've caught over the 4 years.  Though we were in last place for the box (3 largest fish) and the biggest fish, we came home with a lot of fish for curing and eating, so it was a successful and fun trip, again!  It was great having our own boat and we plan on hosting our own boat next year.  If you think you would be interested send us an email so we can start making plans.  The Tournament (derby) is always on a Wednesday and usually the second or third one in July.  We're already looking forward to next year's fishing! 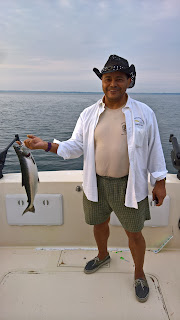 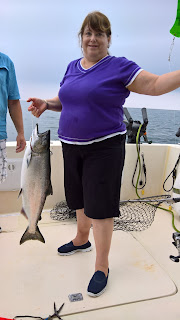