Filtering Facepiece Respirator or Dust Mask. Which is it?

What is the consequence of such a miscommunication?  Well once you require the wearing of filtering facepiece respirators in the workplace, these respirators must follow all the requirements of 1910.134 the OSHA respiratory protection standard.  Which means the workers must be medically cleared to wear the respirator, fit tested with the respirator to ensure it fits, and trained on the use of the respirator.  However, if the filtering facepiece respirator is being used voluntarily, all you must provide is Appendix D of standard "Information for Employees Wearing Respirators When Not Required Under The Standard."  A big difference in requirements.  So be very careful when answering this question during an OSHA workplace inspection. 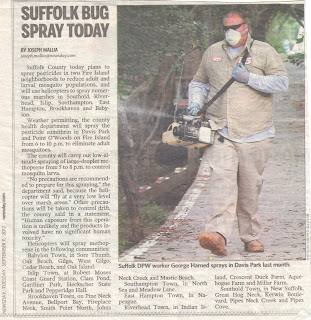 Another problem with dust masks is illustrated by the photo above in an article about Suffolk County's plan to spray pesticides.  What is wrong with the picture?  Well if this worker is spraying pesticides he is wearing the wrong respirator.  Filtering facepiece respirators (dust masks) only protect from dust or particulates.  They do not protect against chemicals that are in the form of mists, vapors, or gases (which is the form that the worker in the picture is spraying).  These forms of chemicals would penetrate through the mask or worse will be absorbed into the filter and potentially concentrate the chemical or allow the chewmical to sit on worker's face.
The only reason for wearing a filtering facepiece respirator (dust mask) is for nuisance dusts (i.e., wood dust, pollen, grass clippings, etc.).  Though this respirator is very comfortable, and lighweight, in our view, it is very dangerous because it is readily available, many people are using it improperly, and many people believe it can do more than it was designed to do.  Use this resapirator very carefully and again only for nuisance dusts, nothing more.  Be safe out there!

The 17th Annual Professional Abatement Contractors of New York (PACNY) Environmental Conference was a success.  Though this is not surprising given the lineup of speakers and great effort that was made by the conference organizers to bring it together.  We would suspect that the organizers might have been nervous about the event, since Mr. Christopher Alonge would not be a speaker on day two of the event.  If you had not heard, Mr. Alonge is no longer with New York State Department of Labor (NYSDOL) he is now with Dormitory Authority of the State of New York (DASNY).  Mr. Alonge was present at the event, and seemed to be enjoying himself.  However, Dr. Eileen Franco saved the day representing NYSDOL as the acting director for the Division of Safety & Health.  Dr. Franco discussed her unit, and updated us on the progress of the new ICR56, which in her words were "imminent".  She was entertaining and we hope she will take our suggestions regarding the asbestos control program and act on them.

Like last year, one of the opening presentations was on PACNY's effort to change the notification fees.  The bill they are discussing is Assembly Bill A3675.  As we discussed last year, this bill would change the notification fee structure so demolition of residents impacted by a disaster would be a maximum of $200.  This change would help disaster affected areas and residential projects by allowing properly trained contractors to better compete with non-licensed or untrained contractors for the asbestos work.

The list of speakers included Brian Sampson from Unshackle Upstate; Joe Cantone from Colden Corporation; Paul Watson from Center for Toxicology & Environmental Health; Joe Hogan from Associated General Contractors of New York State; Dr. Dave Duford from CanAm Environmental Safety; Brent Kynoch from the Environmental Information Association; Dr. James Webber, formerly with NYS Department of Health; Marvin Stillman from the University of Rochester; and Mr. Chris Alund, from the NYSDOL Bureau of Public Work.  All the speakers were very good, however, two standout in our mind.  First Dr. Webber's presentation "Vermiculite: Looking for a Needle in a Leaf Pile" was awesome and had many speaking about it throughout the rest of the conference.  Pretty impressive considering after his presentation it was the cocktail hour in the exhibit hall.  Dr. Webber's presentation was our first official 3D presentation.  Towards the end of his presentation he passed out 3D glasses, and it was very impressive seeing vermiculite with Libby asbestos fibers in 3D.  The other presentation that stood out, was Mr. Stillman's regarding "Hazardous Waste at Project Sites".  Mr. Stillman's presentation included a lot of points that we were not aware of and will be included in future training classes regarding hazardous wastes.  During most of the presentations, we posted points we felt were important on Twitter.  Find those tweets at #FEDTCPACNY.

This year the Industry Roundtable Q&A was moderated by Steve Gheen, PE of Gheen Engineering, and included Darren Yehl of Cornerstone Training Institute, John Massa of Midlantic Environmental, and Angelo Garcia, III, of Future Environment Designs (me).  Questions this year were very interesting and brought out some distinctions in regions and how various types of asbestos work was being done.

The Exhibit Hall was a lot of fun, with the cocktail reception and the breaks spent meeting vendors, suppliers, and competitors (the friendly kind).  There were some new exhibitors and some new equipment at the show.  Fiberlock Technologies was exhibiting a new Advanced Peroxide Cleaner (APC) that removes mold & mildew stains on porous & non-porous materials, it seems to be an impressive product.  DiVal & Aramsco had dueling floor tile and mastic removal machines that sell or rent.  In addition, DiVal was showing a Dust Shroud for Reciprocating Saws from Dustless Technologies.  McLaughlin Vacuum Excavation Systems (Vermeer is the dealer network for this equipment) was another exhibitor with some impressive equipment.  Of course, United Rentals was there and we didn't win the toy truck, again!

Overall, the conference was a great time.  Turning Stone Resort & Casino does a great job with the food, drinks, & entertainment.  In the past few years, we've seen more representatives from Long Island based companies attending the PACNY conference.  We were glad to see George Maul of Insight Environmental, Paul Calzolano of Testing Mechanics, Paul Debiase of Dvirka & Bartilucci, Bart Gallagher of Enviroscience, & Travis Irving of H2M.  We look forward to seeing you next year and look forward to the Long Island contingent growing again next year.