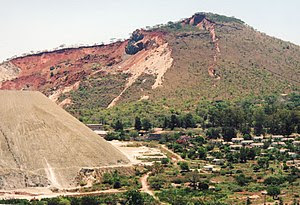 Image via WikipediaIn a previous posting we discussed that the Quebec government had decided to back the loan that would reopen the Jeffrey Mine in Asbestos Canada.  This loan would allow the mine to begin mining asbestos again and exporting it to countries like India.  Now in the following article "Zimbabwe in bid to revive asbestos mines" in the English version of the People's Daily Online (China), we find out that Zimbabwe intends on doing the same thing for two of their mines (Shabanie and Mashava).  These mines used to produce about 180,000 tons of asbestos fibers per year.  According to this article, Zimbabwe has been spending millions of dollars on fiber imports from Russia and Brazil.  Seems to me, that Zimbabwe is tired of importing asbestos when they could be mining it.