PACNY Fishing Derby Was An Adventure

On July 17, 2013 we attended the Professional Abatement Contractors of New York (PACNY) fishing derby.  We decided to attend the fishing derby because we've never fished for salmon before and going on a fishing trip with the PACNY group sounded like a lot fun! 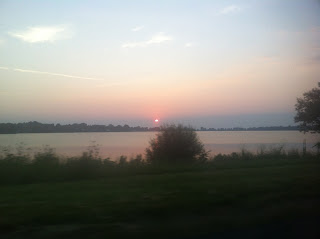 Well the day started with a great sunrise (photo above), as we learned which boats we were on.  We were placed on one of the two Cornerstone Training Institute (CTI) boats.  Our boat was named the Irish Thunder with Captain Joe T. & First Mate Charlie. Our team consisted of Heather King of KBH, Chris Miller of LeChase, Kevin Hutton of CTI, and ourselves.

Once we were all on-board our respective boats , we headed out to the shotgun start (see video above).  Which means all the boats line up straight across & when the bell is rung the boats speed out to the fishing areas.  It was a very hot day and sun shone brightly, meaning we were thankful for air movement.  Captain Joe T. & First Mate Charlie, were very experienced in finding fish and it wasn't long before we had our first catch of the day.  Ms. Heather King reeled in the first fish.  All of us took turns reeling in fish, however, Mr. Chris Miller reeled in the first over 20 pound salmon.  Which we all teased him in how long it was taking him to bring the fish in (we would regret that later).  We were thankful to Mr. Kevin Hutton for stocking his cooler with some really good local craft beers (thank you!). 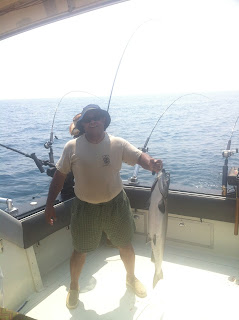 As you can see above, we caught ourselves an over 20 pound king salmon.  Catching a salmon is not an accurate description of what actually took place.  A better description would be is having a tug-of-war with an unknown opponent.  Once you grab a hold of the rod & reel you spend what feels like an eternity (actually 10-20 minutes) of doing forearm curls.  Pull the rod up, then reel in excess line; pull the rod up, reel in the excess line; repeat, repeat, repeat (now regretting teasing Chris about how long it took him to bring the fish in).  Just about the time our arms were saying "we give up", the salmon appeared several yards away from the boat.  Giving us a second wind to bringing the fish on board.  When we were a kid we remember a cartoon that likened fishing to pulling a drain plug from the lake, we now get that cartoon. 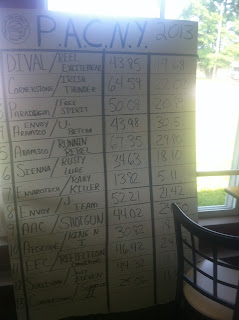 Once the derby was over we gathered at the Black North Inn for lunch, weigh-in, & the awarding of the prizes.  The scoreboard above details the scores. Congratulations to team Aramsco for the biggest basket (three largest fish) and the $500 award.  Congratulations to Brian Warren from the Aramsco/Envoy boat for the big fish.  His 30.5 lb king salmon won him $150 cash. 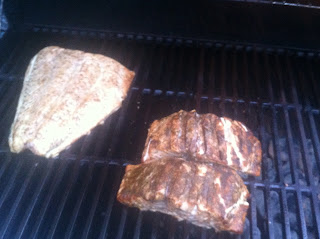 We had a great time and hope to do this again.  Our team was fantastic and entertaining.  Our team won one of the prizes.  We also got to bring some salmon home for smoking & grilling (as you see above).  It was the best salmon we ever ate.