We attended the Metro New York (Metro-NY) American Industrial Hygiene Association (AIHA) chapter meeting on September 9, 2013.  This meeting was on the "New York State Asbestos & Vermiculite Analysis Guidance Update" it was presented in two parts, part one by Robert J. DeMalo, Senior Vice President of Lab. Services & Business Development and part two by Edward Cahill, Vice President of Asbesto, both from EMSL Analytical, Inc.  For pictures from the event visit Metro NY AIHA web album and for copies of EMSL's powerpoint presentation visit Metro-NY AIHA Meetings website for the Part 1 Handout and the Part 2 Handout.
Some very interesting facts from the first part of the presentation included:
Based on the above information it is clear that Libby Amphiboles are the problem and that the nonregulated amphibole portions of the vermiculite is also a problem.  According to the US Geological Survey, the amount of asbestiform amphiboles contaminating the Libby vermiculite as approximately 84% winchite, 11% richterite, and 6% tremolite (American Mineralogist; November 2003; v. 88; no. 11-12; p. 1955-1969).  The mortality rate indicates a need to regulate these amphiboles plus others minerals that we now typically call elongated mineral particles (see NIOSH website for more information regarding asbestos fibers and other elongated mineral particles).  In our next blog post we will discuss part two of the vermiculite meeting. 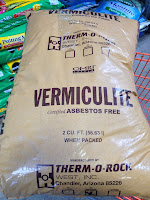