In Future Environment Design's May Safety Suzy newsletter we sent out links to new documents produced by the Agency for Toxic Substances and Disease Registry (ATSDR) regarding Chinese-manufactured drywall.  One document was the 39 page "Health Consultation - Possible Health Implications From Exposure To Sulfur Gases Emitted From Chinese-Manufactured Drywall."  The second document was a 3 page fact sheet "Public Health Implications of Chinese-manufactured Drywall," which is a summation of the Health Consultation document.  The health consultation was established to estimate the exposures to sulfur compounds emitted from Chinese-manufactured drywall and the health risks associated with that exposure.

Chinese-manufactured drywall was imported into the United States (US) from 2006 to 2008, because of the increase demand caused by hurricane seasons of 2004 and 2005, and the already high national demand for new home construction.  In 2008, people living in homes built between 2001 and 2008 began reporting health issues. In addition, people reported the corrosion of certain metal components in their homes.  This became known as problem drywall, this issue wasn't only reported with Chinese-manufactured drywall or just in the south (see the map below for other areas with problem drywall).  The Consumer Product Safety Commission (CPSC)defines problem drywall as:

If both of the above are present look for corroborating evidence which may require outside lab testing. 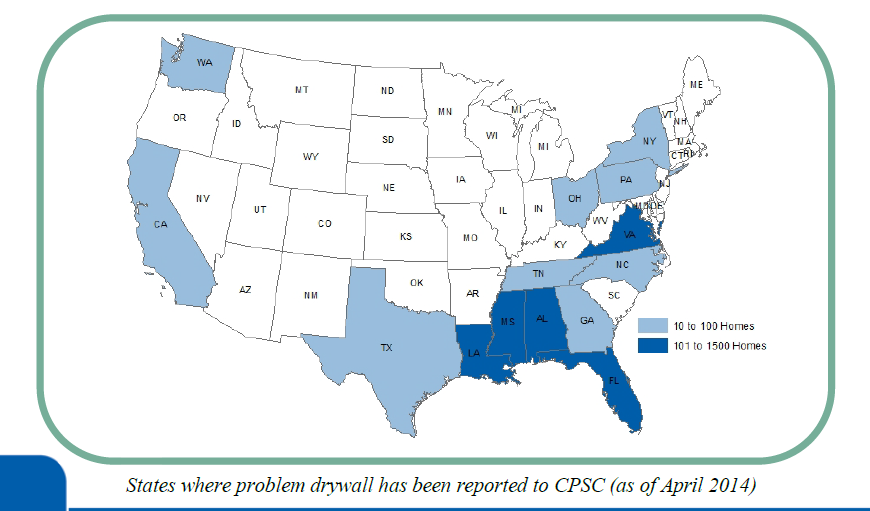 Findings from the Health Consultation found that the drywall samples they tested emitted several sulfur compounds, including hydrogen sulfide, methy and ethyl mercaptans, carbonyl sulfide, dimethyl sulfide, and sulfur dioxide.  The levels found were a public health concern in 2009 when the testing was done.  Emission rates of these compounds increased with both temperature & humidity.

Exposures to sulfur compounds at the levels estimated from problem drywall in 2005 and 2006 may be associated with such effects as:

The odors associated with sulfur compounds could disrupt daily activities and cause stress.

If you have problem drywall the CPSC recommends remediation that would include the replacement of all:

All testing and remediation work should be conducted in compliance with applicable building codes, occupational safety and health standards, and environmental regulations.