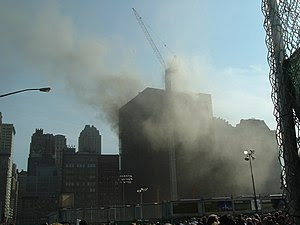 Image via WikipediaOn August 18, 2007, two firefighters lost their lives while attempting to put out a fire in the former Deutsche Bank building.  This fire has had a significant impact on the construction and the asbestos abatement industries.  Recently revised asbestos regulations were the results of suggested changes by a special committee, set-up by Mayor Bloomberg, to specifically investigate the city agency failings and fixed them.  The National Institute of Occupational Safety and Health (NIOSH) typically investigates fires that lead to the loss of life of firefighters.  The purpose is to assist fire departments across the country in reducing fatalities and injuries to firefighters.  NIOSH's investigative report is 44 pages long and determined the following "key contributing factors to this incident included: delayed notification of the fire by building construction personnel, inoperable standpipe and sprinkler systems (published in several news articles), delay in establishing water supply, inaccurate information about standpipe, unique building conditions with both asbestos abatement and deconstruction occurring simultaneously, extreme fire behavior, uncontrolled fire rapidly progressing and extending below the fire floor, blocked stairwells preventing fire fighter access and egress, maze-like interior conditions from partitions and construction debris, heavy smoke conditions causing numerous fire fighters to become lost or disoriented, failure of fire fighters to always don SCBAs inside structure and to replenish air cylinders, communications overwhelmed with numerous Mayday and urgent radio transmissions, and lack of crew integrity."
The report also includes several recommendations, and alot of information regarding what happened including a timeline.  So what started the fire?  A burning cigarette discarded by a construction employee in the decontamination shower area on the 17th floor.  Read the report for more information.