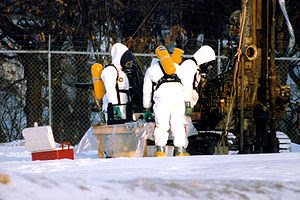 Image via WikipediaIt seems to us that our lame duck Governor is doing all the nasty and dirty work before the incoming Governor has to.  Between laying off state workers, firing the Commissioner of the New York State Department of Environmental Conservation (NYS DEC), and now eliminating New York State's participation in Superfund, its to bad we can't get a tax cap in place, too.  It concerns us how NYS DEC will be able to handle all the work that is scheduled for NYS.  Between the Hudson River Dredging project, the Gowanus Canal and Newtown Creek just to mention a few.  We need to make sure that Governor Patterson's obvious attack on the NYS DEC does not hamper or significantly hinder its ability to perform its functions in New York State.