Last week, the three defendants charged with manslaughter and other charges of causing the fatalities at the former Deutsche Bank building, were acquitted of all charges.  The jury cleared two former managers, Jeffrey Melofchik and Salvatore DePaolo, on June 29, while the Criminal Court Judge Rena K. Uviller acquitted Mitchel Alvo, on July 6.  Uviller also tossed out the major charges against the subcontractor, The John Galt Corp., convicting the company only of a misdemeanor count of reckless endangerment. 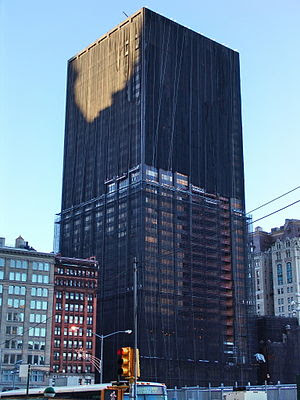 Image via Wikipedia
The former Deutsche Bank building was undergoing asbestos abatement and demolition at the time of the fire in 2007, that caused the death of firefighters Robert Beddia 53, and Joseph Graffagnino, 33, who died trying to fight the blaze.  Charges included multiple counts of negligent homicide, manslaughter and reckless endangerment.
Defense attorneys were able to convince the judge and jury that the actual causes were more complicated.  Those complications included:
It seems this may not be the end of the Deutsche Bank fire issues, because the Uniformed Fire Officers Association, which felt that the wrong people were charged, and thought the defendants were scapegoats, released the following statement: "We urge the Manhattan District Attorney Cyrus Vance heed his self-described duty as to do what is right in every case without fear or favor, wherever that may lead by re-opening an investigation into the Deutsche Bank fire.  In fact, we are demanding that the District Attorney conduct an investigation into the LMDC."