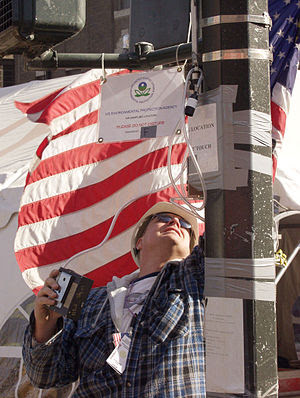 Image via WikipediaAfter listening and reading this newscast I found it interesting how everyone is pointing at the federal government experts (Giuliani, Cohen, etc.), as the reason why the first responders were allowed to expose themselves to the asbestos and other hazardous materials on the site.  A very interesting two part, newscast by WNYC titled Rudy Giuliani and Air Quality After 9/11: Part 1 & Part 2.  The 9/11 cleanup was a huge failure on the part of the Environmental Protection Agency (EPA) and the Occupational Safety and Health Administration (OSHA).  Especially, OSHA who should've been on the site making sure workers were wearing respirators and wearing them properly.  OSHA crowed about 0 injuries at the site after the cleanups were done.  Where are they now, that we know that some 20,000 workers at the site are ill from their exposure to the contaminants at 9/11?