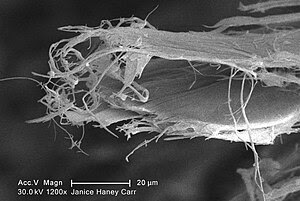 Image via WikipediaLeslie Stayner, an asbestos expert at the University of Illinois's school of public health and a key member of the Canadian Government's expert panel on asbestos is demanding Natural Resources Minister Christian Paradis retract recent comments that cited the group's report to promote the "safe use" of asbestos. The expert report, provided to the government in March 2008, was released 13 months later after a long delay under access to information legislation. Paradis, who represents the Quebec town where asbestos is mined, earlier this month told media in Quebec that the government has "adopted a clear position and there have been no new facts since then. Our position remains the same, that of promoting the safe use of asbestos," said Paradis.
However, Leslie Stayner, sent a letter sent to Paradis last week and obtained by Postmedia News, says the comments to the media are a "total misrepresentation" of the expert panel's report, commissioned by Health Canada.  The letter to Paradis, Stayner said the expert panel was never asked to address the question of whether chrysotile asbestos could be used safely.  "Had we been asked this question, I would certainly not have supported the argument that the continued production and use of asbestos in any form, including chrysotile, is safe. It is impossible to believe that developing countries such as India will be able to use chrysotile asbestos in a manner that protects public health when more technically advanced countries like Canada and the United States have failed to do so," Stayner wrote to Paradis.
Visit Canada.com for the full article at: http://www.canada.com/health/Expert+demands+feds+retract+statement+safe+asbestos/4517500/story.html.  It seems Canada (Quebec) is determined to show that chrysotile asbestos should not be regulated and their is a potential safe use for chrysotile asbestos.  We will see if Quebec reopens the Asbestos mine.