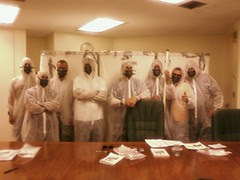 Image by angelogarciaiii via FlickrThose of us in the asbestos industry will find the above news story very interesting (find the original news story at StarTribune.com).  The officials of St. Louis Park schools in Minnesota were worried that asbestos floor tiles (approximately 10% asbestos) were being worn down, by tracked-in salt and sand, and could be releasing dangerous asbestos.  The officials decided to close the city's junior and senior high schools on Monday, February 14, 2011.  The schools will remain closed Tuesday as state and school officials work to assess the hazard and determine if other schools face similar problems.  Asbestos floor tile was commonly installed in hundreds of 1960s-era schools across the metro area, but it remains unclear how many could still have the asbestos tile or how much risk St. Louis Park students faced, said one expert at the Minnesota Department of Health.
Quoted in the article was Diedra Hudgens, senior project manager at Brooklyn Park-based Institute for Environmental Assessment, or IEA.  Her company tested the two St. Louis Park schools for asbestos Monday and Tuesday and will be "taking a closer eye" on the 60 other Minnesota schools it works with.  "We're definitely going to be informing our clients -- other school districts -- about what we found, and we'll definitely be taking steps to monitor it," said Diedra Hudgens.  "Every district has an elementary school or something this vintage."
So what started this concern of salt and sand releasing asbestos?  St. Louis Park school staffers complained late last week about dust outside a school nurse's office, prompting IEA tests on Saturday.  A protective wax layer had been worn down by salt and sand tracked in from roads and sidewalks, dulling the floor.  As a precautionary measure on Monday, school was dismissed for additional testing at both the high school and the nearby junior high -- which has similar flooring.  These tiles were removed from the high school and Monday the school was tested by IEA crews in full protective gear.
What makes this interesting is that the article does not discuss the results of any of the testing done nor does it discuss what type of testing was done?  We can only assume that the results must of indicated a need to do something because the schools were closed and the tiles were removed.  Since Long Island had alot of snowfall this year, and I'm sure we used more salt and sand this year then in the past, this news story implies that there is an increase potential for the release of asbestos from floor tiles that are subjected to tracked-in salt and sand.  It will be interesting to see if and how this story plays out or if it just dies on the vine.