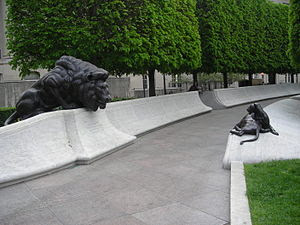 Image via WikipediaLast week on Long Island many mourned the death of Nassau County Police Officer Michael J. Califano.  Officer Califano was killed when a flatbed truck slammed into his car during a routine traffic stop on the Long Island Expressway last Friday night (February 4, 2011).  Though his death was outside his vehicle, it is interesting that the National Institute of Occupational Safety and Health (NIOSH) science blog posting on February 9, 2011 was a discussion on "Cops and Cars".  The blog points out that, the occupational injury fatality rate for police officers was 4 times higher than the U.S. average [BLS, 2009] in 2009.  The blog also discussses a new report by the National Law Enforcement Officers Memorial Fund, line-of-duty deaths have dramatically increased – 40% – from 2009 to 2010 (NLEOMF, 2010).  Possible reasons for this significant increase include budget cuts, the expiration of semi-automatic weapon bans, and a diminishing respect for police officers; but these are, at best, speculations.

The blog then points out that, traffic-related incidents are actually the leading cause of death among our nation's law enforcement officers and have been for the past 13 years (NLEOMF, 2010).  In fact, over the past 5 decades, overall line-of-duty deaths have steadily declined and traffic-related fatalities have increased (2010).  More recently, traffic-related fatalities increased 43% between 2009 and 2010 (2010).  This increase includes officers involved in motor-vehicle crashes and those struck while outside their vehicles.

It is interesting that statistics indicate that law enforcement use of seat belts may be a factor.  Two studies showed that seat bealt use by law enforccement was between 38%-42%.  However, law enforcement have good reasons for not wearing seat belts, including the design of the seat belts can catch their gun holster as they quickly get out of their cars.  Because of this NIOSH is undertaking the first state-wide study of attitudes and beliefs of seatbelt usage among law enforcement officers.  This study will survey a random sample of Iowa law enforcement officers through their agency leadership.  The study will include officers in municipal departments, the state patrol, and sheriff's offices.  As NIOSH begins this research, they are requesting (through the NIOSH Science Blog) to hear from police officers, police administration, law enforcement unions, training academies, and motor-vehicle researchers about their experiences with motor-vehicle crashes and the usage of seatbelts while in patrol cars.  For more information visit the NIOSH Science Blog at http://www.cdc.gov/niosh/blog/.