Businessman Pleads Guilty To Failing To Conduct An Asbestos Inspection 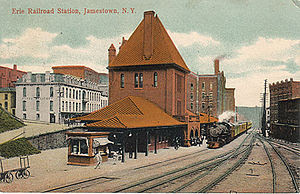 Image via WikipediaSorry we've been so busy we are just getting to this bit of information.  About Mesothelioma.net reported on Thursday, October 28, 2010 that a Bemus Point, New York businessman, Daniel Black, 56, pleaded guilty in federal court to failing to conduct an inspection before an asbestos removal project, exposing workers and neighbors to deadly asbestos fibers.  Mr. Black, president of Blackstone Business Enterprises Inc., a sheet metal and structural steel fabricator in Jamestown, New York, faces up to five years in prison, a $250,000 fine for the Clean Air Act Violation.  Blackstone Business will also pay a $205,000 penalty to the Occupational Safety and Health Administration for citations related to improper asbestos removal and an additional $25,000 to the New York Department of Labor.  Black also pleaded guilty to tax-related violations that came to light during the asbestos investigation.
According to the About Mesothelioma.net report in 2008, Black hired four temporary workers to remove asbestos insulation from steam pipes and cut down the steam pipes as scrap metal as part of a renovation of a four-story building at 100 Blackstone Avenue in Jamestown. The four men were exposed to asbestos during the renovation work, U.S. Attorney William Hochul, Jr., told The Post-Journal.