Study Indicates Increase in Risk of Childhood Leukemia Based on Living Close to Heavy-Traffic Roads. 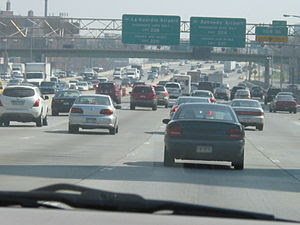 Image via Wikipedia A recent study published in Environmental Health Perspectives called "Road Traffic and Childhood Leukemia: The ESCALE Study (SFCE)" indicated an increased risk of childhood leukemia among children that lived close to heavy-traffic roads.  Published in Environmental Health Perspectives on December 8, 2010, the research used the national registry-based case-control study (ESCALE) carried out in France.  Over the study period, 2003-2004, 763 cases and 1681 controls less than 15 years old were included and the controls were frequency matched with the cases on age and gender.  The study showed acute leukemia was significantly associated with estimates of traffic nitrogen dixode (NO2) concentration at the place of residence greater than 27.7µg/m3 compared to NO2 concentration less than 21.9µg/m3 and with the presence of a heavy-traffic road within 500 meters compared to the absence of a heavy-traffic road in the same area.  The basic conclusion of the study was that it supports the hypothesis that living close to heavy-traffic roads may increase the risk of childhood leukemia.
This study obviously has significant implications for children living near heavy-traffic roads (i.e., the Long Island Expressway) and the indoor air quality where they live.  This puts even more emphasis on reducing the emissions from the vehicles that travel these roads.